* Post contains affiliate links. As an Amazon Associate I earn from qualifying purchases.

What is alkaline water and why would you want to know?

Alkaline water is generally described as water with a pH higher than 7.0.

pH is a number on a scale of 0 to 14 that indicates how acidic or alkaline a substance is. You’ll often see alkaline referred to in relation to water, but your blood also has a pH and so does your skin. Even our organs and digestive tract have a pH level.

Food can also be measured by it’s pH level and you’ll see many diets advocating the health benefits of a more alkaline diet over the increasingly acidic one associated with many Western diets.

To give an example, everyday drinking water from the tap generally has a neutral pH of 7. I.e. it’s neither acid nor alkaline. A coffee would be in the region of around 4.5, making it acidic and green leafy veg, such as kale or spinach, more alkaline.

The Basic Science Behind pH

The actual science behind pH might seem a little more complex (or like something you dozed off from in a science lesson at school!) But put simply, the pH of water is the difference between how much hydrogen (h+) water has vs. how much hydroxyl (oh-) water has.

Acidic water has a higher concentration of hydrogen atoms, whereas alkaline water has more hydroxyls (Hydroxyls are equal concentrations of both hydrogen and oxygen atoms for the science buffs out there.)

Alkaline water therefore has a higher concentration of oxygen atoms than acidic water, meaning that as the amount of oxygen in water increases, so does the pH.

Alkaline Is Not The Same As Alkalinity

However, it’s important to remember that a high alkaline pH is not the same as alkalinity.

And it’s easy to get confused here. Because people often focus solely on pH when talking about alkaline water.

So what’s the difference between pH and alkalinity?

pH is essentially a measurement of hydrogen in the water, whereas alkalinity is determined by the presence of alkalising compounds, such as calcium, potassium, magnesium, and bicarbonate.

Rock is the main source of alkalising compounds, so water that has passed through soil and bedrock is likely to have a high level of alkalinity.

Why are these alkalising compounds important?

Because the body has a complicated pH regulating system that needs a consistent supply of these alkalising minerals in order to maintain this regulation.

Put another way, they determine the water’s capacity to resist changes in pH that would otherwise make it more acidic. This capacity is commonly known as the ‘buffering capacity.’

And it’s this buffering capacity that can neutralise excess acids in the body – a primary reason many people drink alkaline water.

Water with a high pH, but no accompanying alkalinity, however, will not have this buffering capacity to neutralise excess acids.

Still with me? Good.

A simple way to understand this is by taking a staple of most food cupboards, baking soda.

Baking soda is pure sodium bicarbonate, which is an alkalising compound. So by adding a little baking soda to water you raise both pH and alkalinity.

What Is The Optimal pH For Health?

The optimal human body tends to have a pH of around 7.4, making a healthy body pH one that’s slightlyalkaline.

pH levels do vary throughout the body, however, with the stomach being the most acidic region.

What Is Alkaline Water Good For? 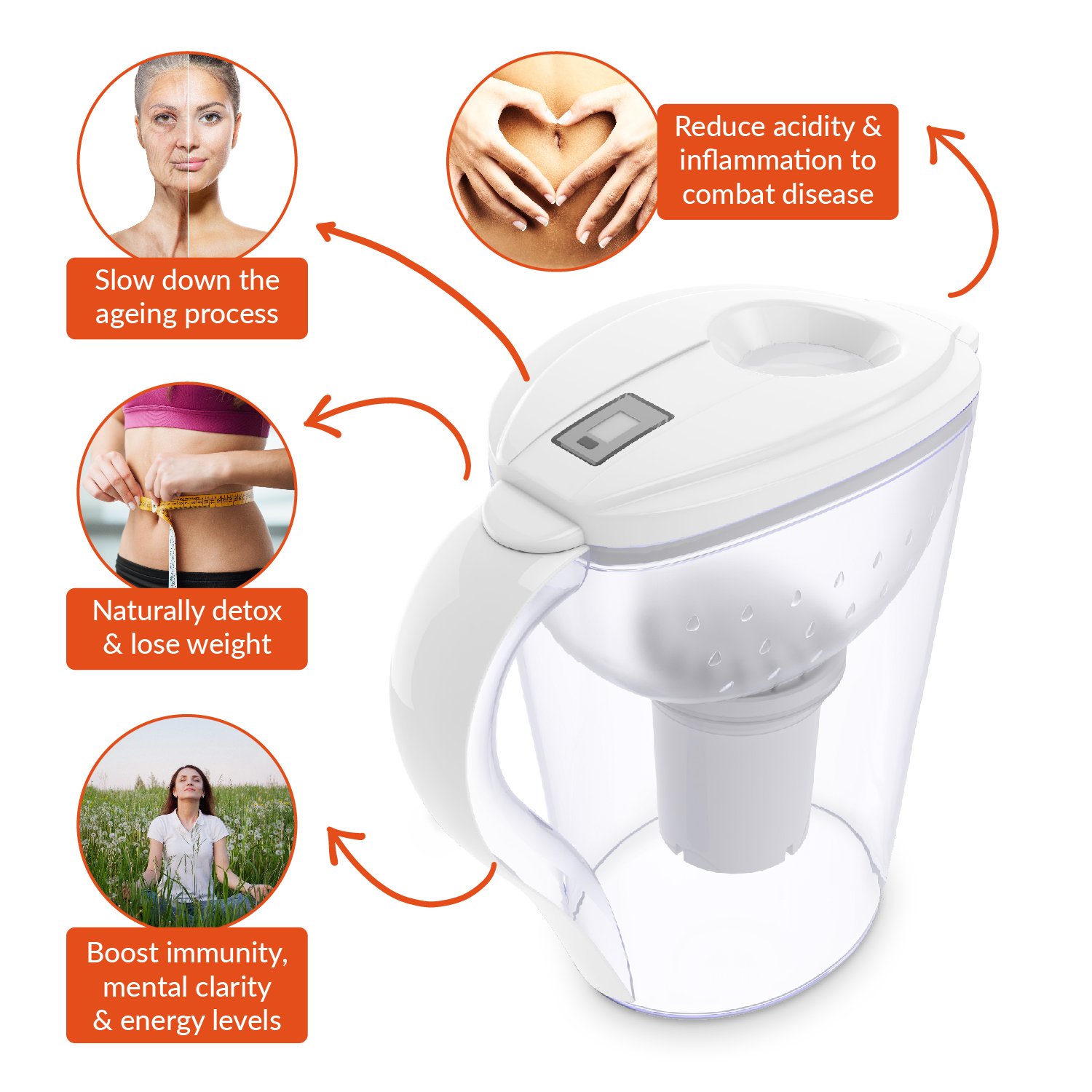 Regular tap water (and much bottled water) generally has a pH of 7, which is considered neutral. Water with a pH of 7 is considered to be pure water.

There’s a growing wave of thought that our increasingly acidic diet in the West may be a factor in ill health.

For example, many people in the West eat a diet rich in acidic food and drink, such as sodas and sweetened beverages, coffee, meat, sugary snacks and overly processed foods.

Processed food and drink, in particular, tends to be acidic in nature and may contribute to a condition known as acidosis. According to Wikipedia:

Acidosis is a process causing increased acidity in the blood and other body tissues (i.e. an increased hydrogen ion concentration.

Acidosis is said to occur when arterial pH falls below 7.35 and has been associated with a range of health issues – from headaches and fatigue to rapid heart rates and confusion.

Advocates of alkaline water believe it may neutralise the acid in your bloodstream and help your body metabolise nutrients more efficiently, which in turn may lead to improved health.

There are in fact many health benefits commonly associated with alkaline water. Some of these Include:

Are There Any Alkaline Water Side Effects?

Too much alkalinity, however, is not necessarily a good thing.

According to the World Health Organisation, alkaline water with a pH higher than 11 may irritate your eyes, skin and mucous membranes or cause gastrointestinal problems.

And if you have a kidney condition or are taking medication that alters kidney function, some of the minerals in alkaline water could start to accumulate in your body. This could lead to negative side effects.

How Much Alkaline Water Is Safe To Drink?

Whilst alkaline water itself is considered safe to drink, drinking too much of anything will always have the potential to cause an imbalance.

For example, alkaline water is often cited as a way to reduce stomach acid. This may be beneficial for people suffering from acid reflux, but drinking too much could deplete stomach acids to low levels.

Drinking too much alkaline water, or drinking water with ahigh pH, may also disrupt the body’s normal pH and lead to a condition knows as metabolic alkalosis (essentially the opposite of acidosis).

Alkalosis may cause issues such as confusion, nausea, vomiting, hand tremors, muscle twitching or tingling in the face, hands or feet.

What Does Research Say About Alkaline Water?

Research on alkaline water and it’s potential benefits is somewhat limited, but some does exist.

In the study “Potential Benefits of pH 8.8 Alkaline Drinking Water as an Adjunct in the Treatment of Reflux Disease” it was found that water with a pH of 8.8 effectively neutralised stomach acid and pepsin, making it a possible treatment for acid reflux.

The Journal of the International Society of Sports Medicine (2010)

Many holistic approaches to health are also strong advocates of the health benefits of alkaline water.

Ayurveda, an Indian approach to wellbeing that predates modern medicine and is thousands of years old has long cited alkaline diets as a key to good health.

The Ayurvedic philosophy teaches that illness and disease manifest when disharmony of doshas, or life energy, occurs, which can lead to acidity or dis-ease in the body.

From an Ayurvedic perspective, drinking alkaline water may help to correct pH, increase detoxifications and protect our cells from ageing.

Similarly, in her book Cellular Awakening, Barbara Wren examines how society has become incredibly dehydrated, which has affected us at a cellular level.

She cites how things like stress, poor diet and insufficient water intake has led to the hydration, pH and temperature of cells becoming compromised. This has, she argues, led to much ill health and a disconnection from the world and universe in general.

Alkaline Water & Cancer (and other diseases)

Search the Internet and you’ll find a host of people claiming to have cured diseases such as cancer, arthritis and ME, as well as many other health conditions, by drinking alkaline or ionised water.

Others, of course, are quick to debunk these claims as inconclusive, a placebo effect or a complete myth.

Some research certainly exists that suggests alkaline water can help the body tackle excess acidity, something often associated with deep rooted diseases such as cancer or arthritis.

One of the problems perhaps with the whole alkaline water debate is that it’s often over simplified.

Rather than view alkaline water on it’s own is a potential miracle cure, it’s more beneficial to view the body holistically. Whilst alkaline water may well have important health benefits, overall good health is also determined by factors such as diet, emotional wellbeing and exercise.

Plus of course, there is no ‘one size fits all’. Whilst many of us in the West suffer from increasing acidity, this doesn’t mean everyone is acidic or that everyone will necessarily benefit from alkaline water.

What Is Alkaline Water – A Final Word

Alkaline water is generally described as water that has a pH over 7.

Alkalinity however, is not the same as pH. Alkalinity is determined by the presence of alkalising compounds, such as calcium, potassium, magnesium, and bicarbonate.

Extensive research regarding the benefits of alkaline water is limited, but research and anecdotal evidence certainly exists to suggest the health benefits are there.

If you want to get an idea of your pH levels, you can do this with litmus pH test strips, readily available online at a very affordable cost.